Attached is a table that can help one to understand the trends of pilgrimages to the Holy Land during 2015. From the month of October 2014 the Franciscan Pilgrim Office of Jerusalem is operating a system of digital bookings, which permits the various agencies to book online the liturgical services in the shrines administered by the Custody of the Holy Land.
This system permits one to have a more precise picture on the number of pilgrims, on their places of origin and on their distribution, besides providing a better understanding of eventual needs. One needs to clarify that we cannot take as an absolute reference the statistics provided by the Ministry of Tourism regarding the entry of tourists, since these can only partially help us to understand the dynamics of the pilgrimage to the Holy Places. The Ministry, in fact, for obvious reasons, cannot distinguish the diverse objectives of the visitors to the Country, if not only in a summary way.
Besides, the Ministry cannot easily calculate internal tourism (Israeli tourists, students, and others). If, on the one hand, it is easier to distinguish between religious non-Christian tourists and Christian tourists, on the other it is not always possible to distinguish between Catholic and non-Catholic pilgrims. One presumes that two-thirds of the non-Catholic pilgrims (Orthodox, Protestants, and those coming from Evangelical Churches) do visit the principal shrines of the Custody (Nazareth, Capernahum, Gethsemane, Bethlehem) and some of them hold celebrations in these shrines.

All the numbers presented in the table regard, obviously, only and exclusively the pilgrims who, through an agency of their choice, have booked a specific service in one of the shrines of the Custody.

In these statistics, therefore, we do not include visitors and groups of pilgrims who, although they did not have a booking, succeeded nevertheless to celebrate in the shrines of the Custody. The numbers presented therefore constitute an interesting indication, but they do not designate the real number of visitors and pilgrims, which should be therefore abundantly increased.

The total number of pilgrims

The total number of pilgrims who in 2015 have booked a service in the shrines amounts to 275,118. The groups were 8,254. The only shrine which, at this present moment, is in a condition of calculating, besides pilgrims who celebrate, also the visitors who frequented, it is Capernahum, which in 2015 received a total of 481,781 visitors. In 2014 (which was not a positive year, because of the crisis in Gaza during the summer) there were 674,327 visitors. We are also thinking of installing a system of automatic calculation of visitors in the other principal shrines. In any case, we think that the numbers registered in Capernahum are sufficiently indicative of the number of Christian religious pilgrims.

If we keep as reference the shrine of Capernahum, we can affirm that 2015 has been rather poor for the number of pilgrims in the Holy Land. After the increase of the numbers during the preceding years, from the crisis of Gaza in 2014 the numbers have visibly and progressively dwindled. If one keeps in mind Capernahum as a point of reference, in 2015 we have seen a decrease of 28,5% when compared to the preceding year. The calmest month is traditionally January, which has only registered 11,117 pax. The summer months, which are traditionally very crowded, have been particularly low in numbers. After various appeals, we registered a good increase (October was the best month with 40,639 pax), and then we registered a decrease in November and again a total collapse of numbers in December. The motivations are linked with the political situation, which has been the cause of fear in the case of the majority of pilgrims. Experts say that October was a good month because pilgrims had already paid for their pilgrimage, even though the problems in the Holy Land had already started. These pilgrims could not cancel their bookings.

The places of origin of pilgrims

The pilgrims coming from the western world (North America and Europe), which in the past constituted the near totality of numbers, nowadays constitute not more than one half of the number of pilgrims. Asia and Latin America are ever more present, while very few pilgrims hail from Africa and Oceania. It is interesting to note the number of pilgrims coming from Indonesia, Brazil, India, Mexico, Korea. Every year pilgrims from China are increasing on a 100% basis. The Countries from which pilgrims have only recently come to visit the Holy Land are also those which are least included in the traditional circuit of pilgrimages, for various reasons:

It is hoped that, by time, the parishes, dioceses or, better still, the Episcopal Conferences of these Countries will organise themselves in order to guarantee to their pilgrims adequate religious services in the Holy Land.

The great majority of pilgrims who book a service is obviously Catholic, and the near totality are Roman Catholics. Oriental Catholics are not very numerous. They often celebrate in oriental Catholic churches in the Holy Land. Instead, we are registering an increase in celebrations of Protestant and Reformed churches, and of different Evangelical congregations (58,479). In generally, non-Catholic pilgrims celebrate in those shrines, which provide specific infrastructure (open air altars, inter-religious places of prayer, etc.). These places are often Tabgha, Gethsemane and the Shepherds Field (other places register less numbers).

The shrines which are most visited

The shrines which are most visited are obviously the Holy Sepulchre (128,453 pax have celebrated), Gethsemane (125,697 pax, of whom 14,981 for the Holy Hour) and Bethlehem (151,626 in total between the Basilica, Milk Grotto and Shepherds Field). Nazareth has been inserted in the system only on 1 November. The number of celebrations in Nazareth is always rather limited, because of the lack of infrastructures. The altars on which groups can celebrate are only three (Basilica, Chapel and St. Joseph). The automatic calculation of visitors remains very difficult, since Nazareth is also a parish and a point of reference for various local pastoral activities. Many pilgrims, besides, re-enter the shrine more than once for prayer and for the proper celebrations of the same shrine.

We are registering a constant increase in groups desiring to make different experiences from that of the traditional pilgrimage. There is an exponential increase in the so-called “Green Pilgrimage”, that is, in those who would like to visit or to make a pilgrimage by journeying on foot through the Country. These are often persons or groups who have already done the experience of the Walk to Santiago or that of the Via Francigena. There is also an increase in the numbers of pilgrims who are returning and desiring to visit other Places or to make more prolonged experiences both in the shrines as well as in other parts of the Country. We are furthermore registering an increase in the requests for infrastructures, which permit a simple and sober welcome for groups. Another request is that of providing areas of prayer and silence in the shrines, which are not easily found. The desired opening of the Kidron Valley in Jerusalem is a step in this direction. These simple data indicate that during the coming years we shall see a greater change in the modality of pilgrimages, which will require a specific preparation, especially on the part of the Custody: 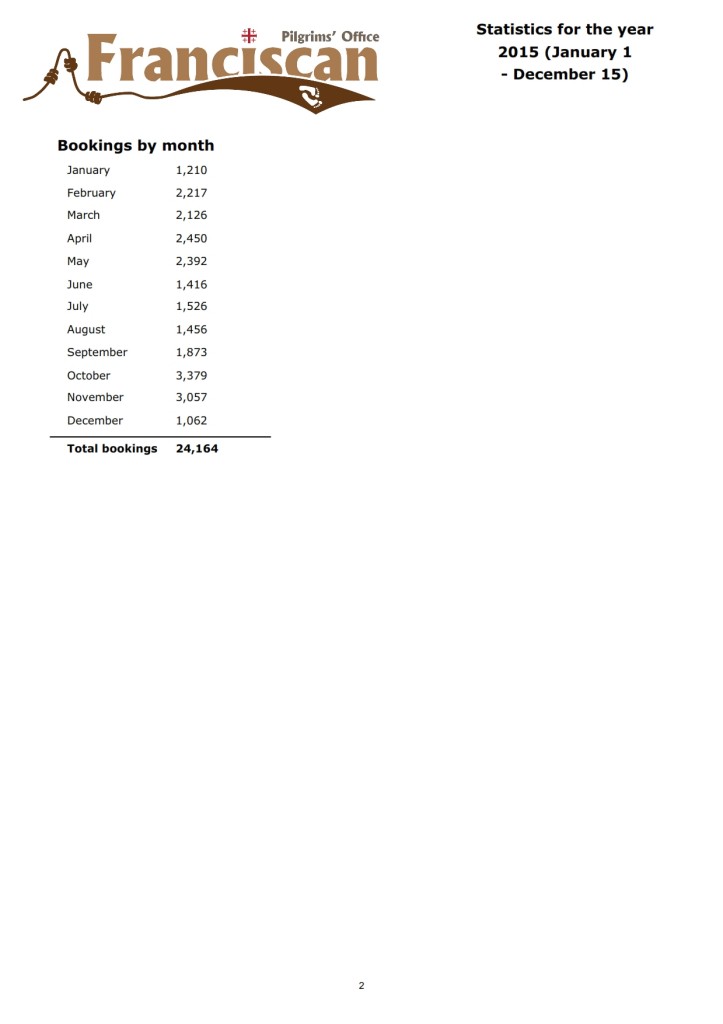 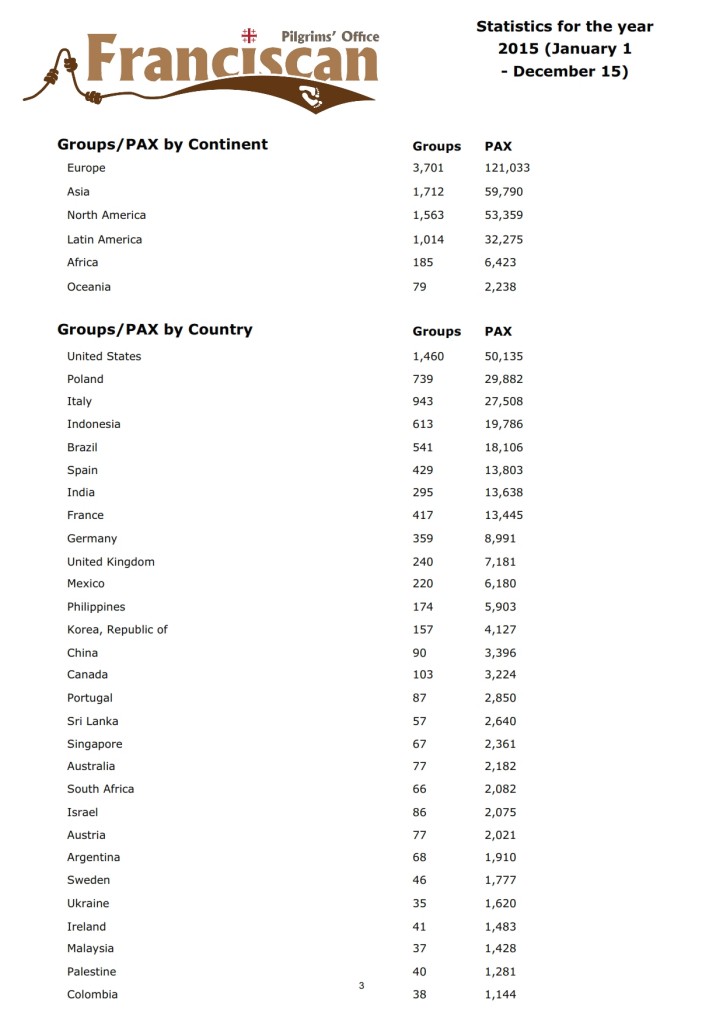 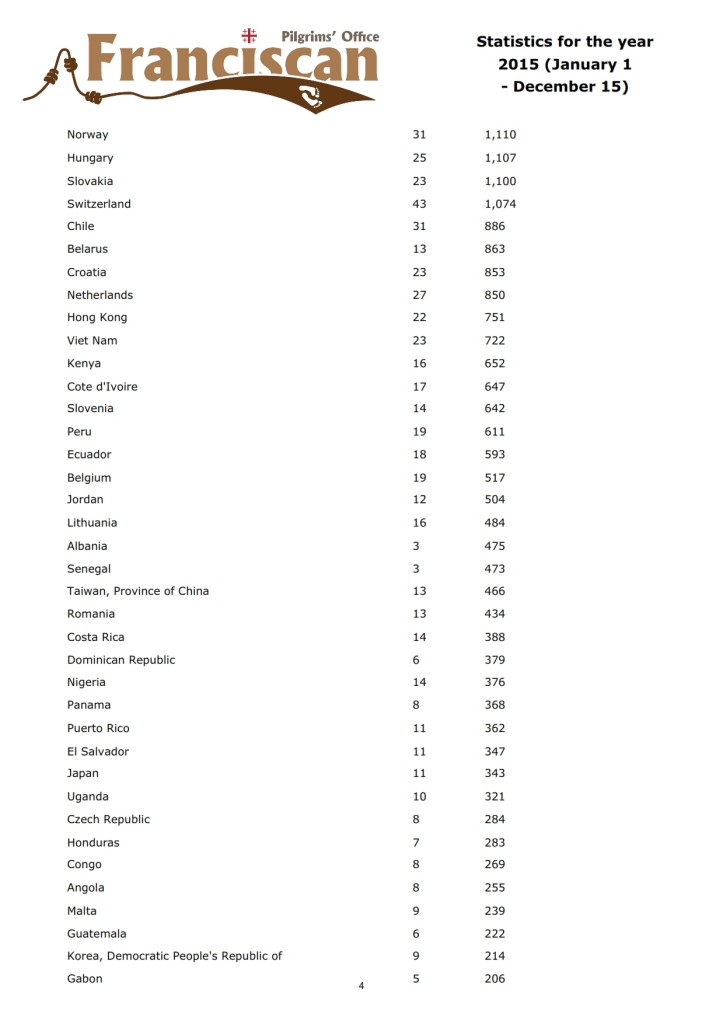 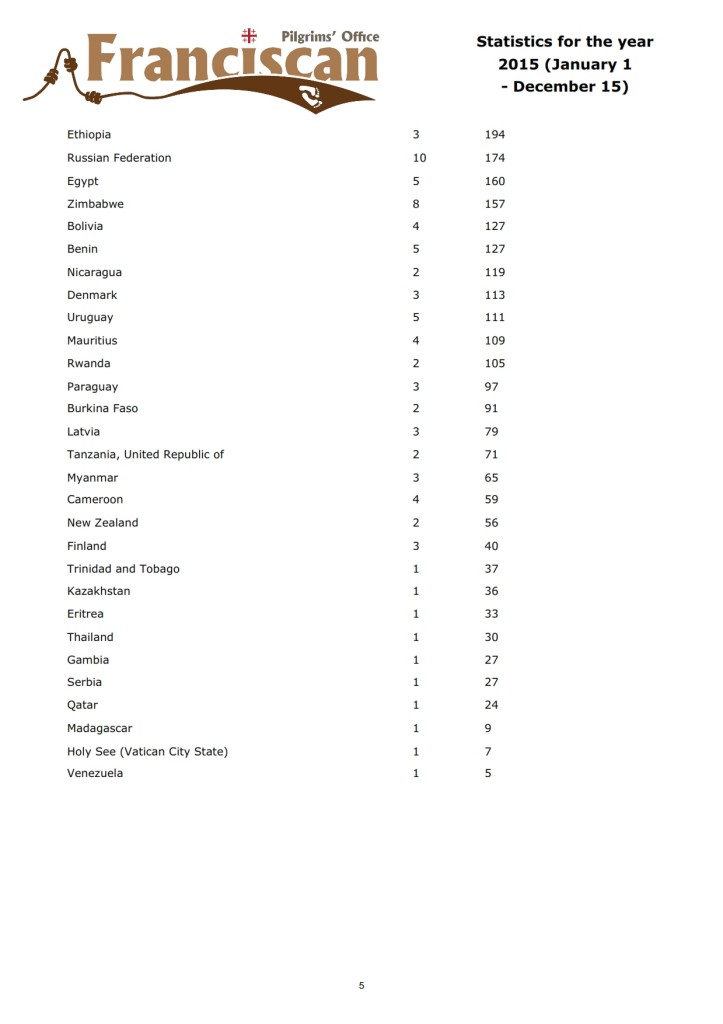 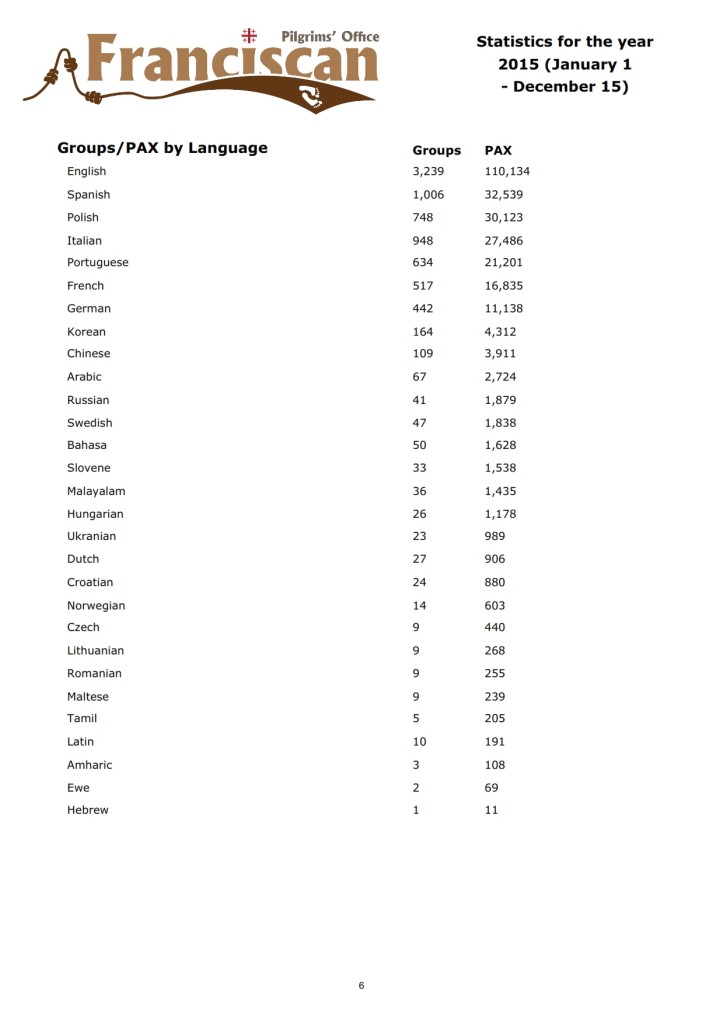 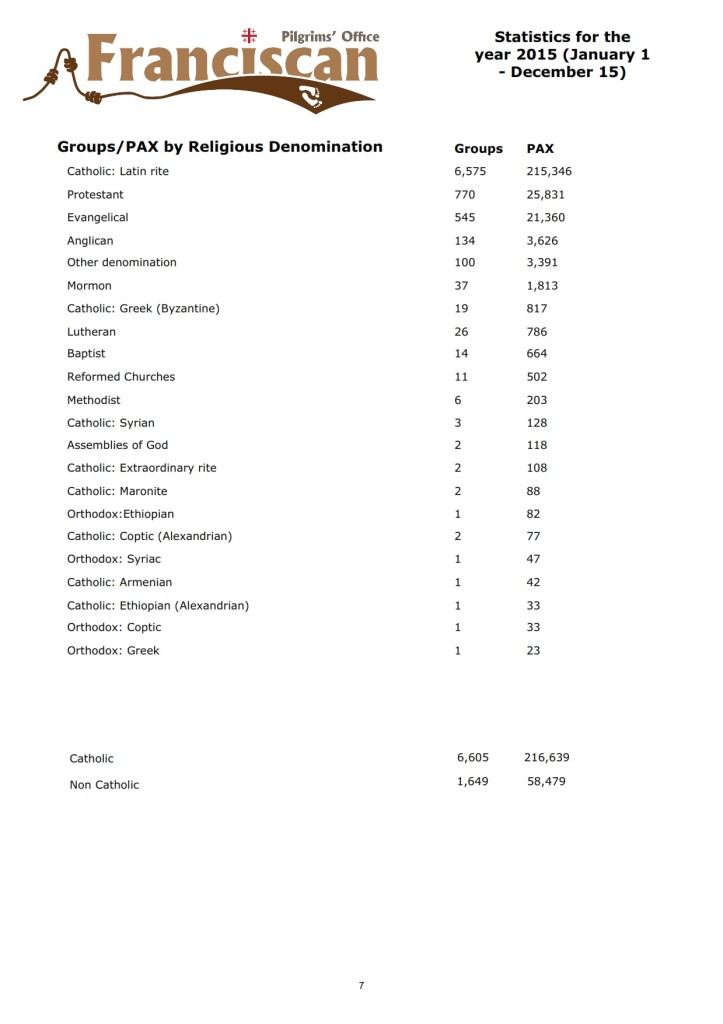 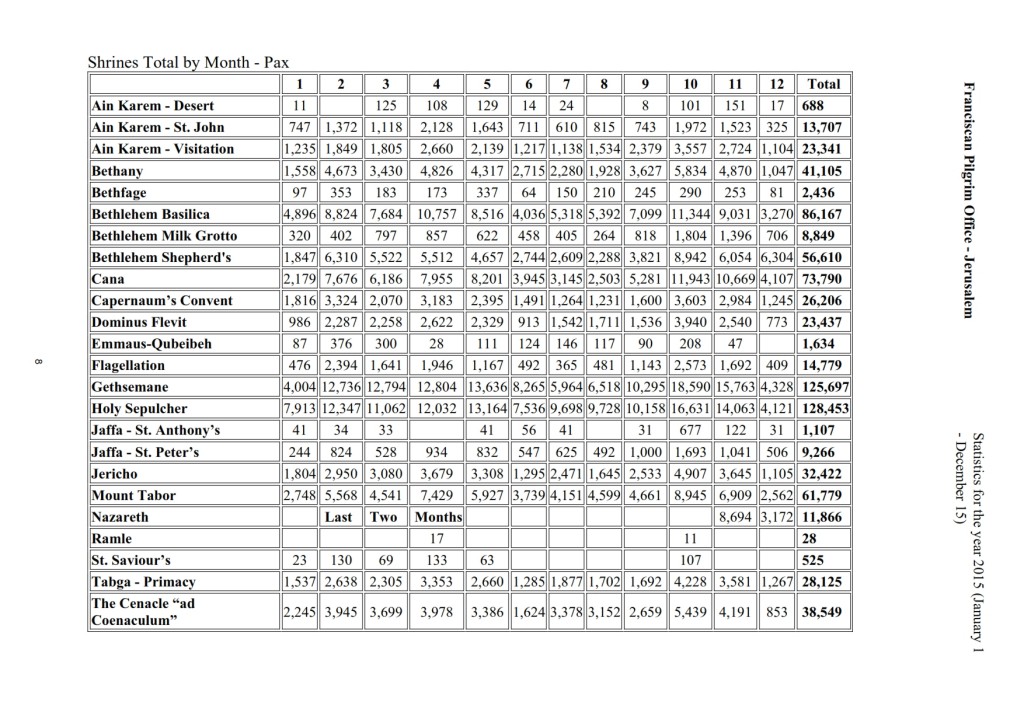 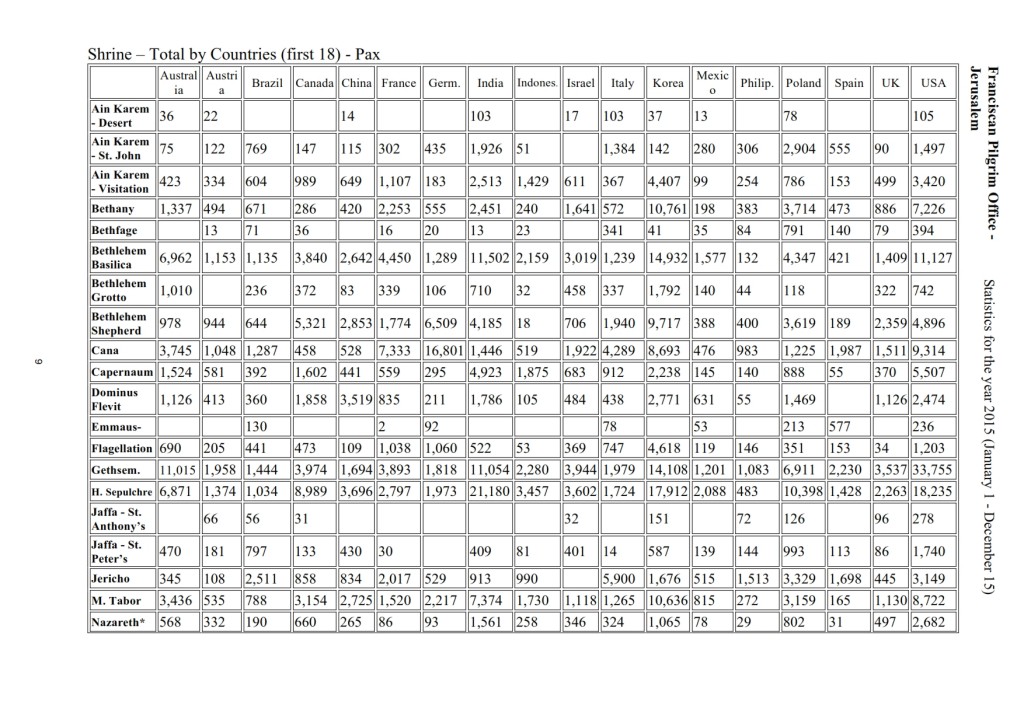 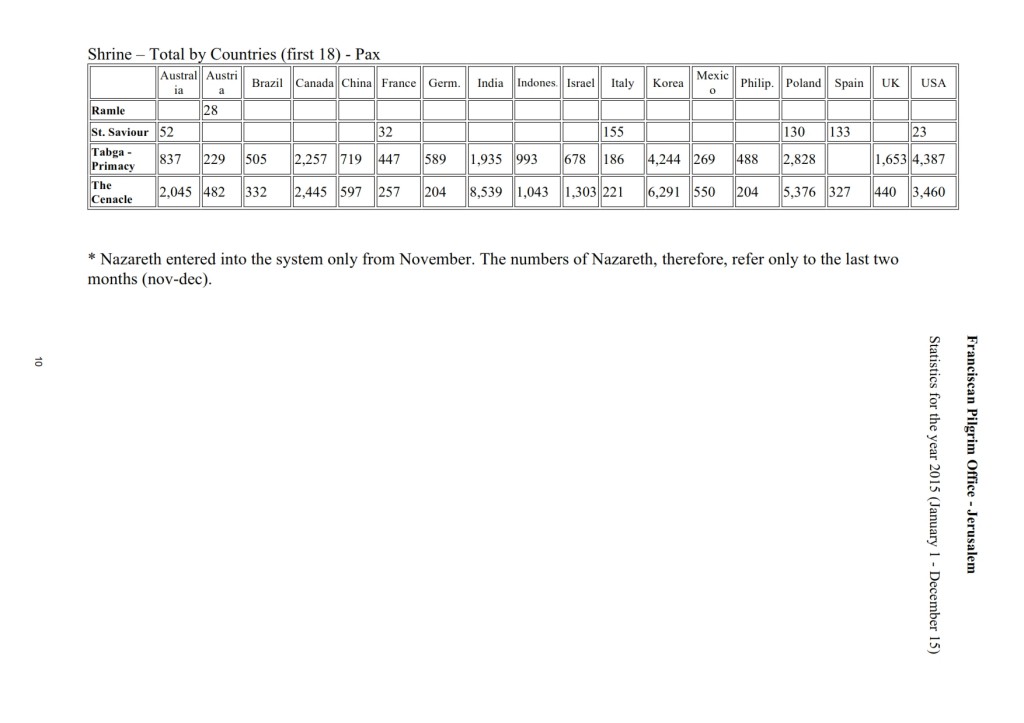